The public shouldn’t need context to trust police are not members of terroristic militias.

There is a political axiom – “if you’re explaining, you’re losing.” It’s attributed to Ronald Reagan and gets at issues of public trust.

Come Monday, Bend PD will likely be explaining. Or trying to. 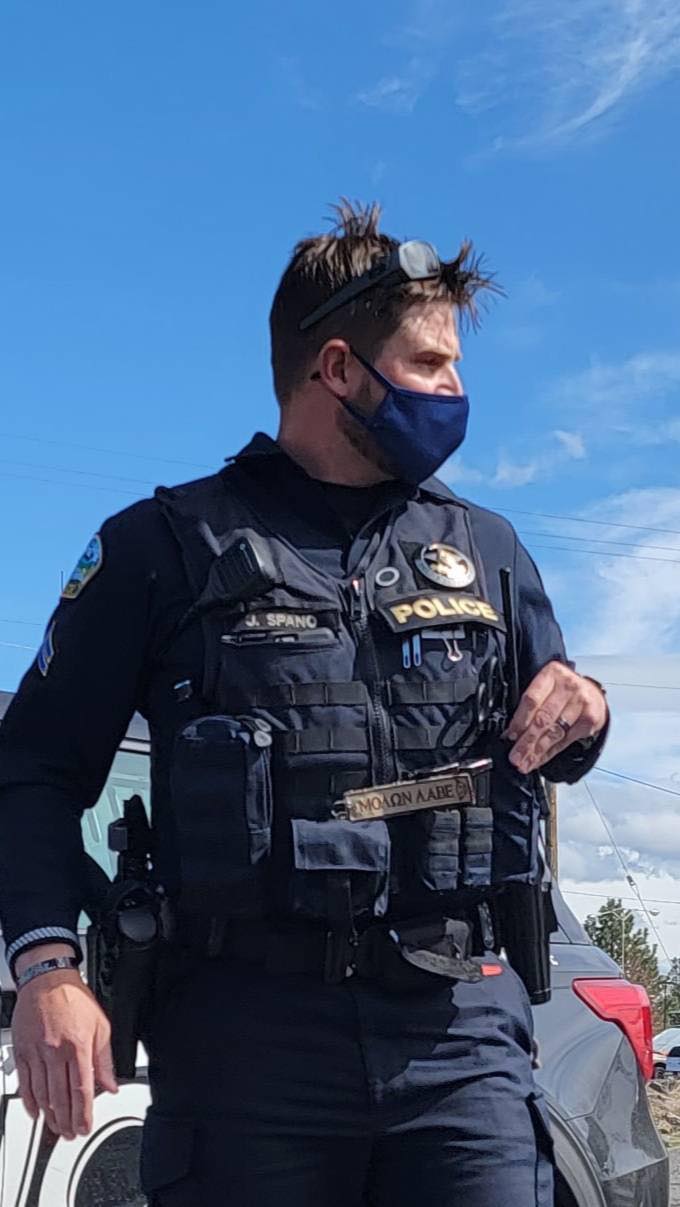 This “come and take them” slogan has become popular among gun fanatics and militias in recent years. Along with the Spartan helmet, it has become a way to signal affinity with certain ideals.

Bend Police have had this conversation already in recent months: Non-regulation patches are not allowed. Bend PD even gained national attention for removing the “thin blue line” from their patrol vehicles. They understand – or have been told – the significance of symbols and maintaining public trust.

We’re likely to be told that Spano’s patch and other violent imagery “needs context.”

It needs a culture of accountability.

Violent, juvenile paraphernalia has no place in a healthy culture of public service.

So, what is the context? That CPL Spano really, really likes overpriced polyester blend, er, “tactical” pants? That he brings his passion for his hobby – playing with guns – to work? Or is it political expression on the job?

Spano’s personal Instagram profile was found to include a lot more violent imagery. One picture gained particular attention online and is useful for illustrating the kind of explanations we can expect.

The picture, from inside his personal vehicle, showed “morale patches” on Spano’s dashboard – including one with a Spartan helmet and “III” (like the III%er militia). It turns out this patch is just the brand logo for a “tactical outfitter” who uses militia symbols to sell camo pants and more – “from battlefield to backcountry.”

Another patch reads “Pipe Hitters Union.” It’s a motorcycle club founded by “special operators,” but has just become something “cool” and motivational among a certain set, like the Punisher skull.

Then there’s the book on the dash: “People to Kill.”

It’s a notebook! Hahaha! That thing is sold by a place that looks like what you’d get if Spencers were run by the NRA, with an extra heaping of cringe.

Feel better now that that’s all been explained? 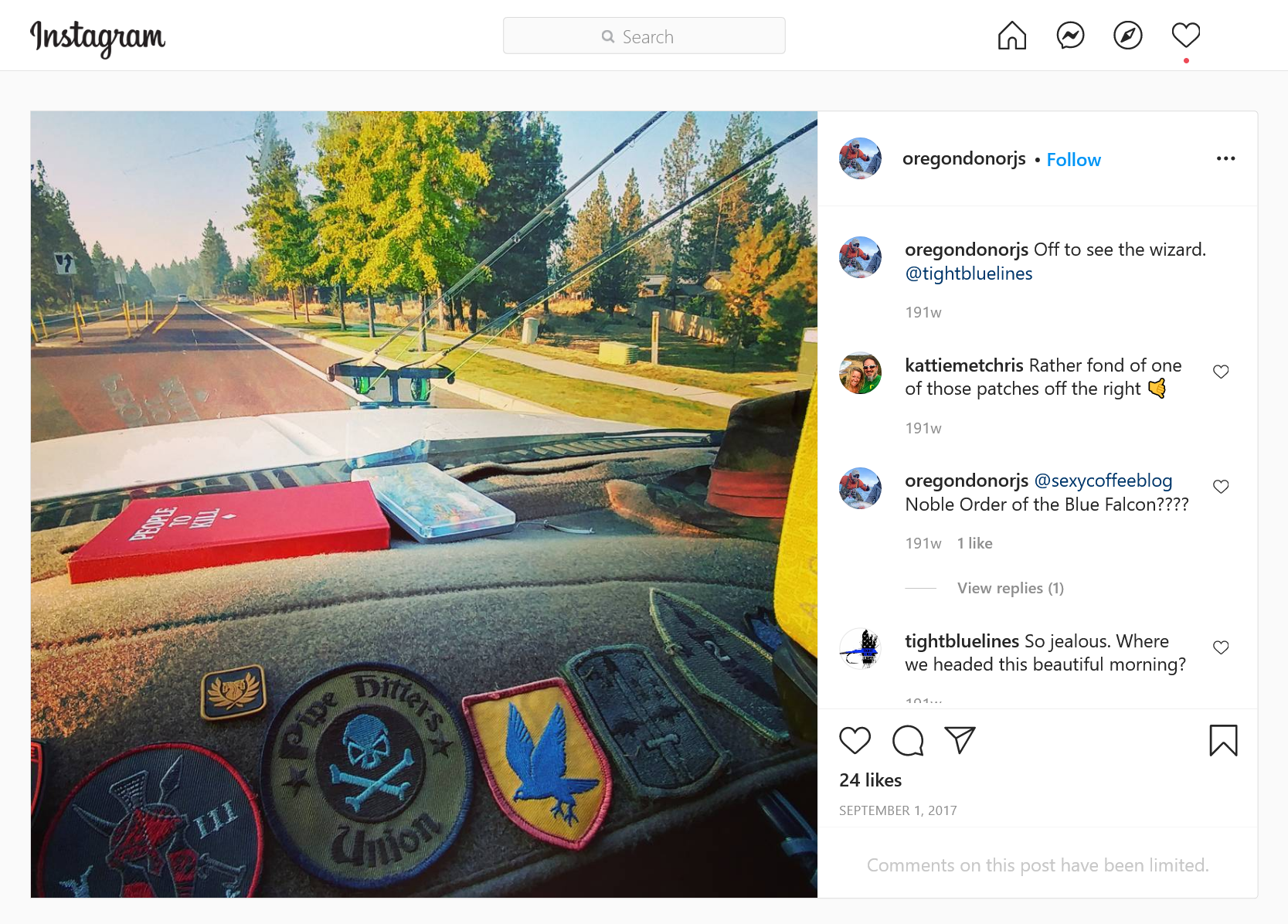 I get it. I liked Marilyn Manson and all kinds of dumb, trangressive schlock… when I was 15 years old.

It’s fun! It’s silly and not serious! It’s a way to deal with other kinds of stress and let loose. And it’s a way to test the limits.

That’s all fine when you’re a sophomore in high school. Most of us have different standards for a public servant entrusted with the state’s monopoly on violence.

The stuff on Spano’s Instagram feed is a catalog of the worst excesses of “gun culture” and the absolute nonsense that is anything “tacti-cool.”

We’ve come to understand the role militarizing our police has had in bringing us to where we are. From equipping departments with surplus MRAPs to fostering a siege mentality with all the trappings of “combat” on the streets, these attitudes are antithetical to the “protect and serve” spirit that was supplanted when policing went “tactical.”

After the January 6th insurrection at the US Capitol, we’re also beginning to understand that a lot of hostile “culture war” stuff isn’t “just politics” or “just an opinion” – it’s often something much more dangerous.

Spano’s Instagram feed shows elements of all of this.

That Pipe Hitters patch? Spano first showed it off repeating the quote on the packaging: “Good people sleep peacefully in their beds at night only because rough men stand ready to do violence on their behalf.”

In another post, he groused that others – “naysayers and politicians” – wouldn’t be able to do the job of policing because they’re cowards.

That “molon labe” thing? It’s not limited to cutesy “morale” patches. Spano appears to have a leg sleeve tattoo with the slogan. Above it, Lady Liberty is holding a pistol with a suppressor (a silencer).

Unfortunately, it doesn’t stop there.

Following the attack on the Capitol, Gizmodo discovered that Bend PD had an account on Parler – the site where much of the attack was organized and anti-government conspiracies ran amok. The department claimed it was to prevent imposters, then went silent.

Corporal Joshua Spano also had an account on Parler.

The contents of users’ profiles was lost when Amazon cut hosting service to the platform, but we can still see who was active and who they associated with there.

Spano appears to have served honorably as an Army combat medic with the 172d SBCT, including at least one tour in Iraq. He lost a friend over there.

A lot of us lost friends.

The military breeds a certain kind of gallows humor, a lot of gung ho talk, and even a good dose of racism when talking about the enemy. From “huns,” “Fritz,” and “Jerry” to… much worse. It’s a unique culture that is hard to appreciate from outside and we excuse certain excesses for the stresses our troops endure.

I don’t mean to pick on CPL Spano here, but he is providing a good glimpse at the culture inside Bend PD. Others have claimed that officers left the department over a culture problem there. This episode might go some way toward corroborating that claim.

The public shouldn’t need context to trust police are not members of terroristic militias.

Local volunteers working with Bend’s houseless population shared the picture of Spano sporting the molon labe patch on duty. Spano issued a citation for trespassing to one volunteer who was filming Bend PD that day.

Needless to say, trust was already at a deficit without the addition of Spano’s gun culture “flair.”

We’ve heard from city staff, councilors, and the chief of police that “context” is needed to understand decisions at Bend PD.

There is no explaining this. It’s a culture problem. Simple as that.

That needs to change. No more delaying.