What kind of behavior is appropriate for a school board member?

Only two people are vying for Position 4 on the Bend-La Pine School Board:

Apart from the unbridled rage and vitriol, two things stood out about Henton’s use of Twitter: 1) he used multiple accounts, but more in the manner of someone who loses passwords; and 2) he never wrote an original tweet – just replies to others. He’s strictly an angry comments guy.

Several Bend residents found and shared some of Henton’s more egregious tweets today. That prompted Henton to lock down his social media accounts, so these are no longer publicly viewable.

There are some real doozies in here.

Henton appears to be all in on anti-Obama conspiracies: “potus is executing promise made to his father in his book to destroy colonial powers“

No surprise how he got so wrapped up in school policies on COVID, now is it?

During the 2016 primaries, he says Trump is only running “to enhance the Trump brand!!“

By 2017 he was tweeting “thank you Mr President”

I’ll not repeat the numerous disparaging comments regarding Islam except to say that they reflect a tone that is all too commonplace among the Republican base – the sort who listen closely to what Republican leaders tell those who trust them.

This is a portrait of a man lost to obsessive political rage.

That’s probably a familiar story to many of us with family who have been abused and lied to by the movement that brought Trump to power and continues to fabricate stories about beef and more.

Whatever the case, this man does not belong in any position of authority. Certainly not one influencing the children of our community.

Tweets on this account ranged from September to October 2020.

This account dates back to November 2015 and tweets through late 2017. Several screenshots are grouped together for convenience.

Several replies in this set appear to be replying to, for example, Donald Trump. However, from context, it appears Henton was instead replying to someone who replied to the person named in the tweet and an intermediate tweet is missing.

NOTE: Henton was asked for comment via his campaign and has not yet provided a response. This story may be updated.

Gregg Henton has not responded to requests for comment, but he did offer a denial to the CO Daily:

“He didn’t respond to a request for an interview, but earlier this week, he told Central Oregon Daily News the accounts were not his.”

The method of impersonation required for this to be true is unheard of as a political attack. Legitimate tweets would have to be created at the time marked – in this case as far back as 2015. Given that, there are only two ways to pull it off. Either you:

Option 1 requires years of forward planning. The statistical likelihood of that scenario becomes vanishingly small. Moreso when other limiting factors are considered.

Option 2 is possible, but there is a way to disprove it: You can tell when someone’s username was mentioned by others even if the username changes or the account is deactivated.

If you used Twitter’s advanced search function and enter the username in question in the “Mentioning these accounts” line, you can find other users mentioning @gregghsunriver going back to 2015.

What this means is that the username was in use as far back as 2015 – it was not changed recently in order to impersonate anyone.

Now, is it possible there is another Gregg H in Sunriver? Possible, yes, but verifiable. There was no other Gregg H living in Sunriver from 2015 to now – as verified by state voter registration records, court records, and property records.

The statistical likelihood of an imposter keeps shrinking.

Next, there are context clues.

We can see that the content of the tweets matches his topics of interest (“read history ass“) and the manner of his speech elsewhere (if more aggressive on Twitter).

The profile picture used is in fact one that he used as a profile pic on Facebook in 2015.

We can also see that Henton has recorded 169 transactions with the Federal Election Commission to various MAGA and GOP outfits. Orestar shows a few hundred dollars spent locally on Republicans as well. This helps show partisan intensity – he is someone willing to back up his beliefs with money.

Put all of these pieces together and we’re starting to talk forging Obama’s birth certificate levels of good for whoever pulled off this caper! All for the weakest of four school board candidates, one who only decided to run at the last minute when the local Republican Party chairman recruited him.

Gregg Henton is running as part of a joint campaign with Maria Lopez-Dauenhauer, Wendy Imel, and Jon Haffner.

They call themselves “School Board 2021” and a PAC called United 4 Education foots the bill.

On Thursday, Lopez-Dauenhauer posted tweets seemingly of disapproval as Henton’s tweets gained traction in the community. These were posted after I asked whether the joint campaign would denounce Henton’s behavior. 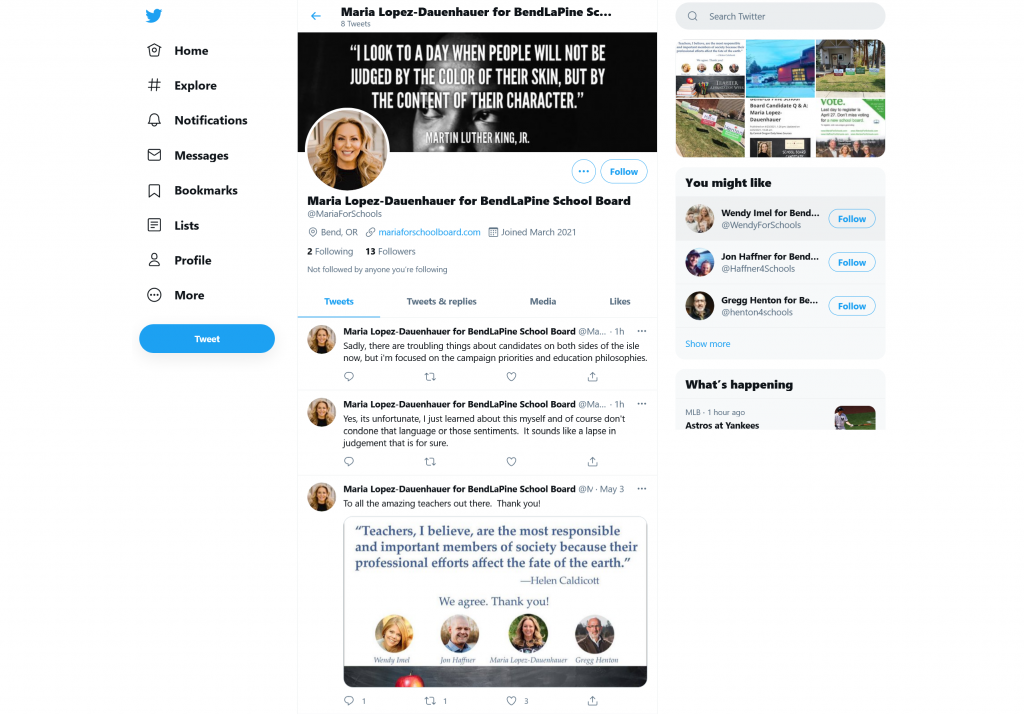 That vague-tweet condemnation was deleted the next day.

Soon after, a statement of defiant solidarity was posted to the “School Board 2021” website. The letter complains about efforts to “mischaracterize our views and misrepresent our words.”

Let’s be clear: They’re Henton’s words, not mine.

All four candidates are now doubling down on denial.

The problem with running as a joint campaign is that you become bound to each candidate. Their actions reflect on your judgement. With this statement, each of the four are making a choice in how to treat this.

They could demonstrate leadership. They could model appropriate behavior and making hard, moral choices for their students.

Instead, you get this.

It’s also no longer just the four on the ballot. Local Republicans have now gone public with their endorsements for this bloc.

Those endorsements were issued after Henton’s tweets were made public.

Henton reportedly told others that he was recruited by Henderson while staffing the Republicans’ booth at the Sportsmans show in March.

“So I was manning the Republican Booth at the Sportsman’s show and Phil Henderson said they couldn’t find a fourth to run for school board. So I asked if that’s something I could do.”

Other notable names include:

Whereas it briefly appeared Maria Lopez-Dauenhauer might have understood what the right call was, politics won out. With the passing of a day, the joint campaign undoubtedly had a huddle and decided what course to chart.

They chose doubling down. On hate.

In case there is still any doubt that Gregg Henton might be the kind of angry comments guy who tweets the nonsense displayed here, he appeared on the Lars Larson show on Wednesday and removed all doubt.

One choice line: “What they’re going to be doing is pushing a – I hate to say it – but a guilt trip on our children, especially our white children. Billy won’t play with me because I’m white.’ This is where this is going.”

Much more at the link.