A reader sends along this Newsweek headline from last week and link to a photo on Michael Sipe’s Facebook page.

The punchline is that Trump is reportedly avoiding deposition in a fraud trial:

Filings in District Court for the Southern District of New York said the former president is staying at his home in Palm Beach to avoid answering questions from lawyers about a 2018 lawsuit that accuses Trump of using his reality TV show The Celebrity Apprentice and other businesses to promote a fraudulent multi-level marketing company to investors.

Not familiar with MLMs? The Federal Trade Commission has a combined page on Multi-Level Marketing Businesses and Pyramid Schemes. Others, like the podcast The Dream, have described MLMs as scams preying on the poor often with strong cult-like religious overtones.

Sipe is a Republican candidate for the Oregon state legislature in House District 53 representing part of Bend and northern Deschutes County. He posted video of his promotion ceremony at ACN Inc on YouTube in 2011.

The photo of Sipe pictured with Donald Trump attached to this article was found on Sipe’s personal Facebook page and dates to an ACN event in 2009.

It is not clear the extent of involvement Sipe had with ACN Inc or what he did to earn promotion to Regional Vice President. He does not list the experience on his LinkedIn profile, for example.

Candidate Sipe touts himself as a “businessman, not a politician” on his promotional materials.

His resume and biographies describe experience running a strategic consulting firm during the time in which he appears to have been involved with ACN Inc. That firm, CrossPointe Capital, was used to inject a $50,000 loan into Sipe’s political campaign.

His campaign is also reportedly under investigation by the Oregon Secretary of State for potential campaign finance violations stemming from the business summit he is putting on in the name of his political campaign. Local businesses like Subaru of Bend and Pahlisch Ventures and “Anonymous Donor Couple” are listed as sponsors providing sizable contributions that do not appear in his mandatory campaign finance reporting. This event is heavily promoted on his campaign’s social media account.

Trump’s involvement with ACN appears to be that of a hype man. Here’s how an earlier Newsweek headline put it:

This 2016 report from FOX11 pulls few punches on the impact this company had on people:

Trump went on to further throw ACN under the bus in this quote to the Wall Street Journal:

I do not know the company. I know nothing about the company other than the people who run the company… I’m not familiar with what they do or how they go about doing that, and I make that clear in my speeches.

Michael Sipe has not made clear what he went about doing with the company as a Regional Vice President.

A tipster shared a cache of emails dating to 2010 saved in an old Google Group. View them here.

The emails contained here are dated more than a year after Sipe was promoted to Regional Vice President (February 2009 per the video above). They give a glimpse into Sipe’s role with the company and display a heavy focus on recruitment – that hallmark of an MLM.

In one email, Sipe coaches readers in recruitment methods saying,

Treat this like social networking (not “MLM”) with friends telling friends and get a buzz going. Your business will explode. 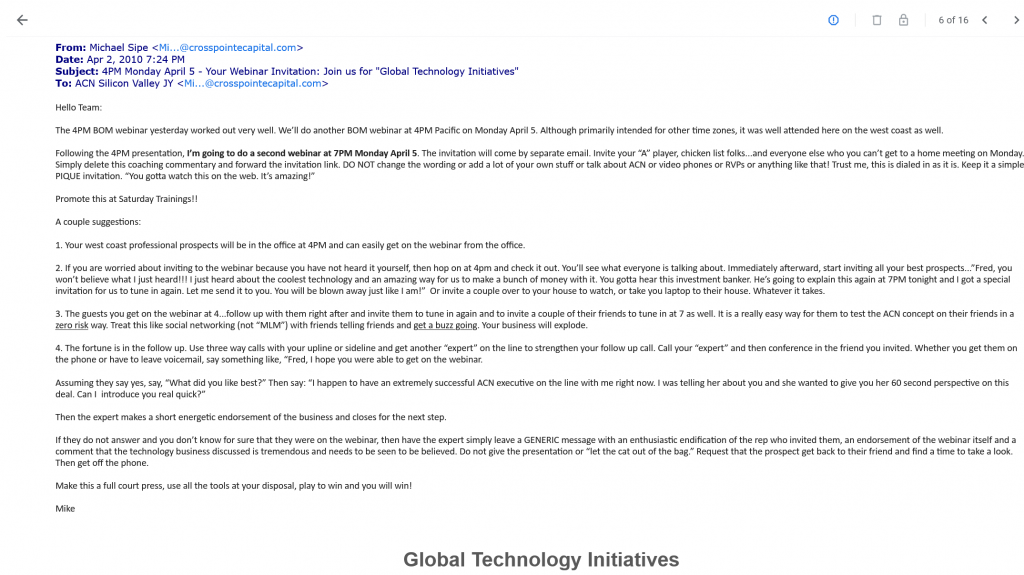 There is scant mention in these emails about a product or service. In fact, the email above discourages discussing the product in favor of getting prospective recruits to join Sipe’s webinar:

DO NOT change the wording or add a lot of your own stuff or talk about ACN or video phones or RVPs or anything like that! Trust me, this is dialed in as it is. Keep it a simple PIQUE invitation. “You gotta watch this on the web. It’s amazing!”

Sipe led several online webinars and even regular seminars at the Shilo Inn in Bend driving recruitment into ACN Inc. This flyer was shared for one such event: 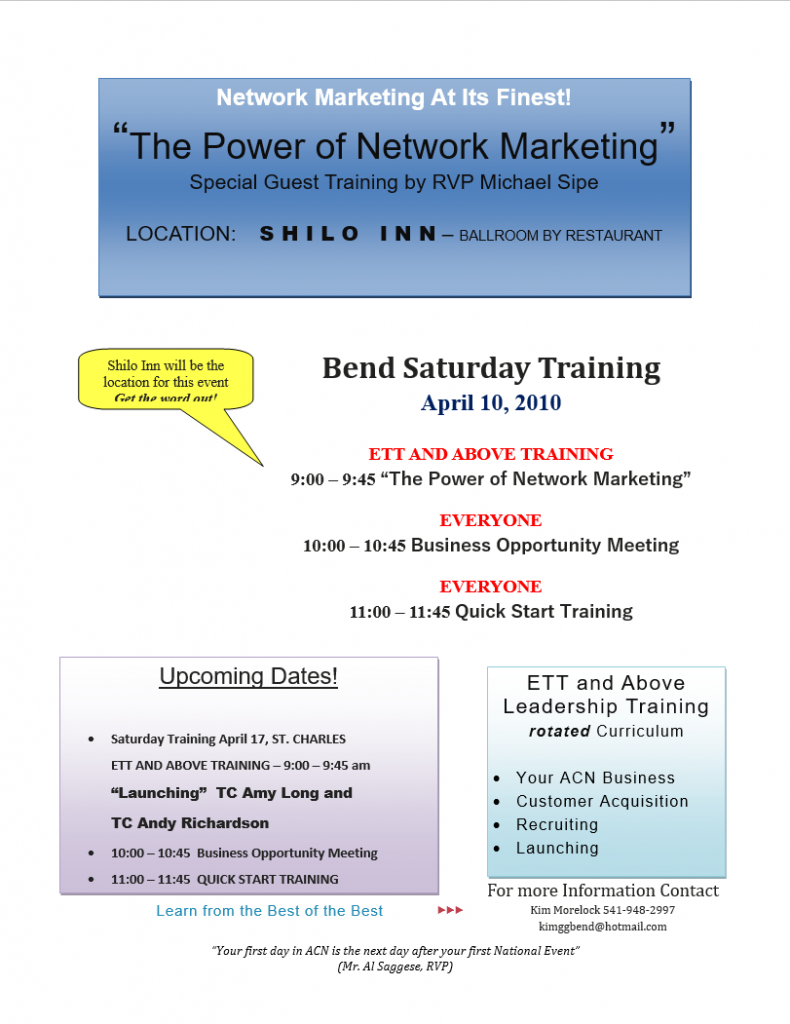