The lying is a problem.

Honesty is a good thing to model for young students. For some, though, winning at all costs seems to matter more.

Newspapers shy away from using the word “lie” because it’s hard to know whether someone is knowingly spreading a mistruth or doing so out of sincere ignorance. Some lies are so inherently malicious that the distinction doesn’t really matter.

What the four crank candidates for school board in Bend are doing covers the full gamut – from ignorance to malice.

Some things might be chalked up to being novices who haven’t done their homework. For example, when a position like school board member is called “nonpartisan,” that simply means there isn’t a partisan primary for the position. That’s it!

There is no obligation to live an ascetic life shunning all politics. That’s just silly. The evidence is in how the four cranks themselves accept partisan support. Witness the Deschutes Republicans page on the election endorsing these very candidates.

Ron Osmundson in Redmond took this to absurd levels by resorting to the local Republican Facebook group to decry partisanship. Make no mistake: this line of attack is routine and disingenuous.

Now these four cranks in Bend are seemingly circulating a series of attacks in Facebook groups that portrays the other accomplished candidates as mere puppets of Carrie Douglass. That would be college counselor Marcus LeGrand, veteran school administrator Shirley Olson, and tireless advocate who currently works advancing schools Janet Sarai Llerandi. 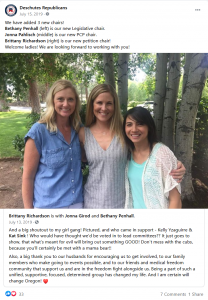 This was spotted in a Facebook post from Bethany Penhall – a ringleader in the local antivax movement who became the “legislative chair” for the Deschutes Republicans in 2019 (see right). Curiously, the Penhalls are also connected to the Dauenhauers through a recent real estate transaction in Northwest Crossing. Also spotted in the picture from 2019 at right is Jonna Pahlisch, one of the main funders for the “School Board 2021” PAC. Her last name might sound familiar.

Here is one part of the eight page attack making its way around Facebook: 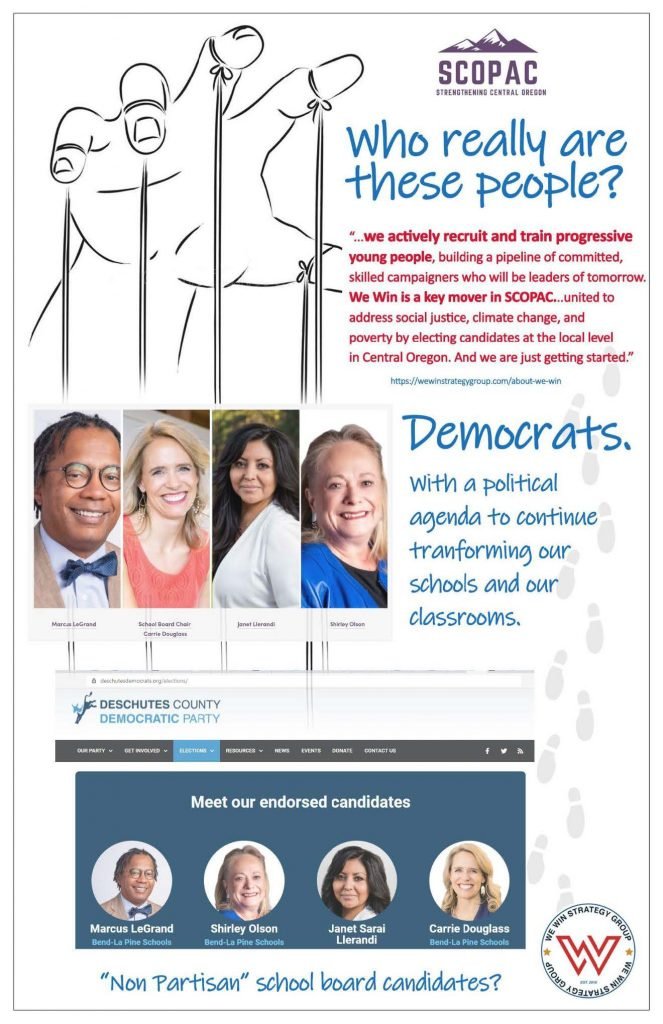 This is part of a packet in Google Slides that looks like the Burn Book from Mean Girls.

They dig through dating profiles for Janet and share pictures. Seriously.

They menacingly quote a profile of Marcus with Allyship in Action and emphasize “equity and social justice” as though it’s red meat to Laura Ingraham viewers.

As with so much in Republican politics, projection seems to play a strong role with this crew.

Attacks are normal in politics. It’s healthy to distinguish yourself from others, but it can quickly cross a line into displaying bad judgement. What this bloc of cranks are doing is more pathological.

The whole “Parents not politicians” schtick is corrosive, no different than saying “Real Americans” as an attack elsewhere. They are delegitimizing their opponents with that, but also showing a degree of dissonance that is frankly unhealthy.

The manner in which they decry partisanship belies a certain ignorance. Yet, the fervor with which they engage that particular line of attack – while themselves coordinating with partisans! – reveals a deep  callousness toward the truth.

That all might be chalked up to desperation and amateurishness if we didn’t also see an easy willingness to lie elsewhere. Their characterizations of school curriculum are about as connected to reality as wild tales of witchcraft in seventeenth century Massachusetts were.

The Source Weekly has you covered with broader context on the obsessive and sudden zeal over Critical Race Theory.

“This is a coordinated effort to subvert the will and the trajectory of local politics in favor of fear-based national talking points that have no bearing on what is happening in our community.”

What voters want is transparency. Honesty.

It’s ok if you have friends support your campaign. Just don’t hide it. That’s why you’ll see Marcus and the others proudly displayed on the Deschutes Democrats website!

“Tired of politics dominating the priorities of education? So are we.” “We” being the local Republican Party as they promote a politics that denies and erases the experience of others.

We could spend all day documenting the numerous lies and mistruths from these cranks on issues of race, their excuses for evading local media, and so much more. But it’s the inherent malice that is a bigger problem than the basic fact checking balance sheet.

These cranks or the people they pay to conduct politics for them are now sifting through dating profiles and trying to gin up scandal… meanwhile they see no evil in Gregg Henton’s well documented hate. They’ve even doubled down on support for Henton with a joint statement decrying mischaracterizations. Henton is telling people the accounts aren’t his.

Whatever else is going on, the lying is a problem.

The churlish, negative attacks do remind me of one thing: If you’re going negative, it’s usually because you’re losing.